I am in advertising. I have advertising space and sell it. And I do it through algorithms, databases, big data analytics, traffic flows and so on. My ad platform is linked to Paypal and other credit card payment platforms. But I use AdBlock.

For those who don’t know, AdBlock is a software plug-in that blocks most of the automated advertising within and around a website. Some may say it’s ironic. Others would call me hypocritical. But I am a humanist.

Online advertising is great. It has provided endless advantages to big and small advertisers alike. Not 15 years ago, a small company could hardly publicize because a billboard, radio or TV ad came with a budget in the tens of thousands of dollars. Thus, the only thing they could do was hope for some editorial content, buy a newspaper ad or risk a magazine corner.

Today every company can set aside a budget, log onto Google ads, Facebook, Twitter or a number of advertising platforms, set up a campaign, select target audiences, and hope for the best. To me, this sounds fantastic because it is a, somewhat, democratization of the ad space. Yes radio, TV, print and billboard media still belong to the Blue Chip, but on online anyone has enough money to advertise to his target customer. Great.

However, this has created another problem. And it is a big one.

As a hobby, I also write for car magazines, both online and in print. And have been doing it for 15 years. Fun side project to have, if you ask me. But I remember how business was done then, and how it is now. Print numbers have all but gone, thus all the reading happens online. In 2003 we had three sales people contacting potential advertisers to offer the thousand upon thousands eyeballs of readers we had. It took style, flare, a certain level of cunning and a clear strategy, both commercial as well as editorial.

Today, those three jobs have disappeared. We call nobody to offer our ad space. We have AdSense. Google is kind enough to guarantee advertising revenue in exchange of keeping the lion share of the profit, and saving us the salary expenses. And like that we don’t know what we advertise, or to whom. Our team is composed of various motoring journalists with different interests, and our website is different to each of us. The products advertised depend on the person.

Here we could raise the argument that Google and Facebook know everything about our interests, but I really don’t care that much. What I care about is that as long as we have the pageviews, we make money. No matter what we do. We could report on the new Bugatti Chiron or display blurred pics of Kim Kardashian. As long as we hit our 200,000 uniques, we are ok.

This has created a monster. A monster that is not only numbing our content creators to the importance of quality and accuracy but shifting the focus to generating clickbait strategies. However, the main problem is those three jobs we no longer have. Those three guys left. And they are not Google programmers. They just talk for a living and will now be selling something else for somebody else.

We can also assume that some of the people they talked to in the advertising side of things are also gone, because now they don’t really have to do any sort of market research into the kind of public their ads reach. And, those guys are not Facebook programmers either. They used to analyze audited media reports and assess ROI, reach and brand recognition to maximize the impact. They will be doing something else for somebody else now.

And all seems good but the problem is getting more evident by the day. McDonalds is already working towards self-ordering, which will send thousands of cashiers to the streets, a robot substitutes 8 salaries on average, an algorithm decides how much mortgage you can get and voice recognition systems assure you how important your call is.

The tide is unstoppable and unless we do something radical, the path leads to massive unemployment. And rest assured, this new rave about the gig economy won’t cut it. Keep in mind that almost nobody is as smart as Zuckerberg, as resourceful as Musk, as good looking as Emma Stone, as fast as Ussain Bolt or as good a singer as Beyonce. The “create your own business!” motto won’t do, mostly because the potential client won’t have a job or disposable income, and those who do may be busy looking at pictures of cats, or watching their confirmation bias news pieces. 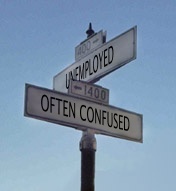 There is terrifyingly little we can do about this. Technology won’t stop and it shouldn’t. But the organic bits of our society lack the foresight to the upcoming change. Add to this the barrage of commentary we get from our TV commentators and economic gurus, preaching the gospel of re-training, re-education and workforce re-configuration. Lovely concepts, aren’t they?

You know what? Let’s do it. I want you, political pundit, opinion guru and electorate representative, to quit what you are doing, and get to learn Python, R-Language, DNS, PLCs and servocontrols. Go ahead and give it a shot. And then, with the knowledge of your advances in the field, get back to your commentary on how easy it will be to regain employment when the factory you used to do keychains at has a robot that makes zero mistakes.

In the meantime, I will do my bit. I will only watch adverts that are hard coded into the website. Because those are not contextual. They do not follow me around, and come out of the verbal and written communication between at least two individuals that, still, have a job. Perhaps you should do the same.