Behind the scenes at the BMW factory. Dingolfing

It’s curious to think that, at 2.3 million cars sold per year, BMW is only a fifth the size of the industry leaders. Toyota for example steadily makes 10 million vehicles per calendar year. That’s similar to Volkswagen, close to Nissan-Renault, and slightly ahead of Hyundai, Kia and General Motors, all of which are just shy of 8 million apiece. Consider also that BMW, as a mid-size company, has 34 production plants all over the world, and that the two factories we visited have 4,600 and 3,100 employees respectively. At the big one, which makes the 3 through to the 7-Series, a car is dispatched every 36 seconds. And yet, in terms of sheer size, BMW is still dwarfed by its mainstream counterparts in Japan. 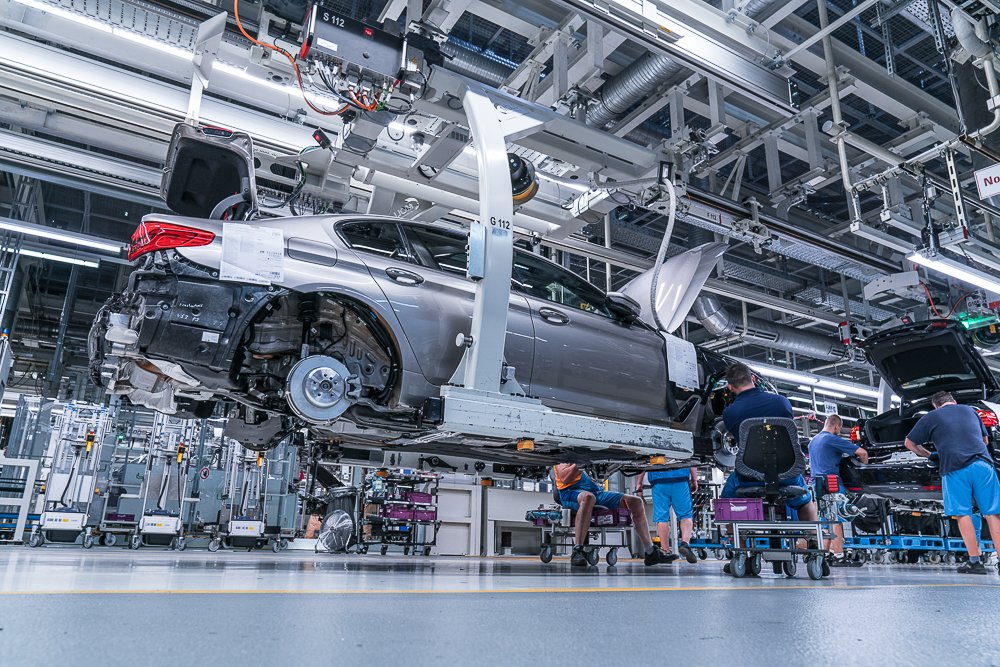 What it lacks in size though (easy tiger), BMW makes up for with technical ingenuity, as we were recently introduced to during an in-depth factory tour on the ground in Bavaria.

“Alongside the thousands of employees, Dingolfing also counts 450 robots on staff.”

Alongside the thousands of employees, our big factory – Dingolfing – also counts 450 robots on staff. Each is hooked up to a centralised monitoring system that monitors what each production step is doing, for what, for whom and for where. Our hosts in Bavaria explain that the latest rave in industrial automation is Industry4.0, which comprises a vast array of technologies beyond robotic manufacturing, and includes industrial IoT, smart – read ‘automated’ – energy efficiency strategies, convergence, smart logistics etc. It turns out that BMW has outpaced the integration smart systems beyond what makes economical and quality sense, to the point that the company is actually scaling back some its processes. To put that another way, while many of its rivals are still working on implementation of automated software, BMW is already on its way back.

And that’s just one of the systems we’re introduced to, in-depth, at Dingolfing. In line with latest robotic trends, BMW is also working in the field of ‘collaborating’ robots. 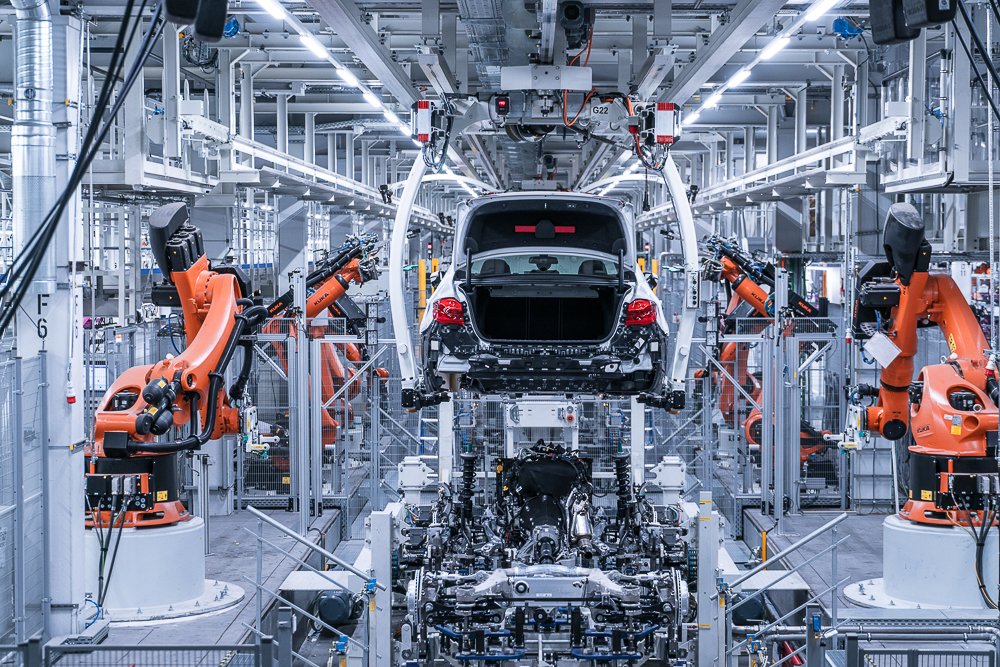 Let me break that down for you. Traditionally, regular robotic production is done in cages where humans are not allowed. It’s a good policy, given that your standard automotive automaton has 240kg of payload capacity, no eyes and no brain, and handles large metallic parts and tools that are either very sharp or very hot. A ‘collaborative robot’ on the other hand works alongside factory personnel performing different tasks: in Dingolfing for instance, they’re used for visual inspection and measurement of the seams between car doors and bonnets.

“while so many of its rivals are still working on implementation of automated software, BMW is already on its way back.”

As you can imagine, making a car is an expensive process, one requiring vast amounts of power. Consequently, aware of the corporate responsibility (and surely aided by pollution regulations), BMW is on a powerful drive to reduce its carbon footprint. Consequently, the company has invested heavily in renewable energies and recycling ON TOP of its automated robotics network. It’s a staggering amount of investment, particularly when you consider the capabilities said automation is capable of. We are particularly impressed for instance by the flexibility of the production lines, with Dingolfing handling the 3, 4, 5 AND 6-Series line-ups, both in sedan and GT formats, simultaneously. Add to this the made-for-customer arrangement, and the complexities of this supply chain is mind-boggling. 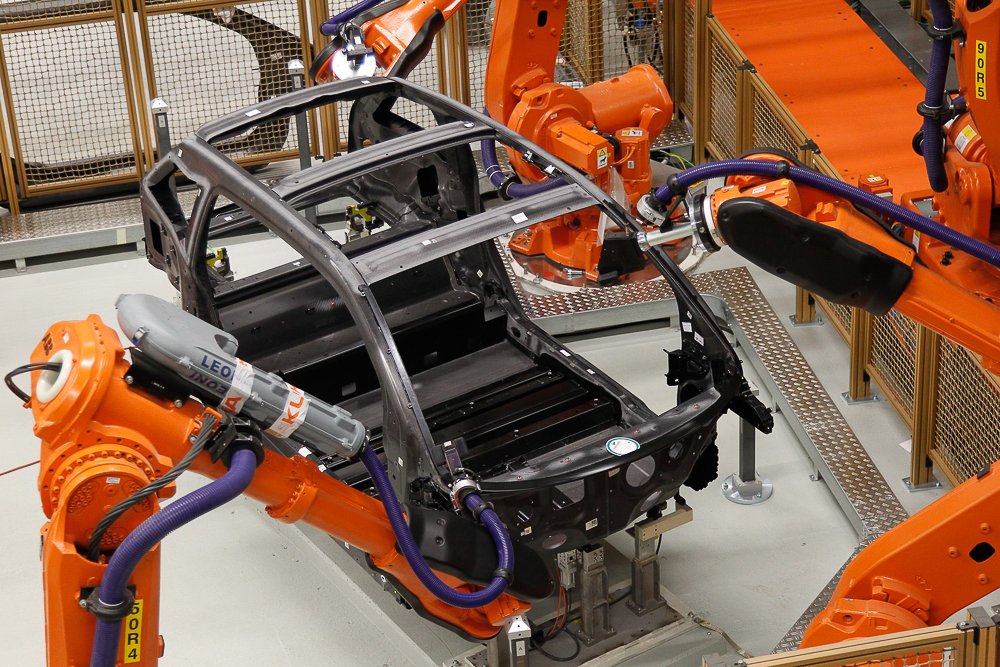 During our time in Bavaria, we also had the opportunity to visit the Landshut plant, which makes shafts, carbon fibre elements and aluminium components. Expecting dark, dirty, hot and murky surroundings evoking images of furnace-feeding men, we instead find a spotless facility with pristine ovens and autonomous carts. Luckily for our party, the latter can detect human presence when they’re on the move and can stop automatically, thus avoiding both the tragic loss of human life and the resultant paperwork.

It’s here also that BMW’s all-electric ‘i’ division is made, and as much as has been written about the company’s hallowed i8 sportscar, it’s the i3 that truly steals the show at Landshut.

In another display of social and environmental responsibility, the i3 is made to be 97% recyclable. Alas, this fantastic vehicle only offers about 200km of range, which, while sufficient for normal city traffic, may prove lacking on harsh conditions where the air-conditioning or heating is a necessity. That said, we’re likely to see it around globally towards the end of 2018, probably with a BMW-trademarked range extender (we call this device a ‘generator’ as it only charges the batteries).

Alongside making essential elements to the entire BMW range, Landshut also belongs to the BMW Development Network. Principally research and development, this setup encompasses 34 other distributed research centres in the BMW family that seek cooperation programs with local universities and technical colleges. These in turn cover everything from material development to production enhancements and AI. They even churn out a high percentage of skilled technicians for the vast German automotive industry. 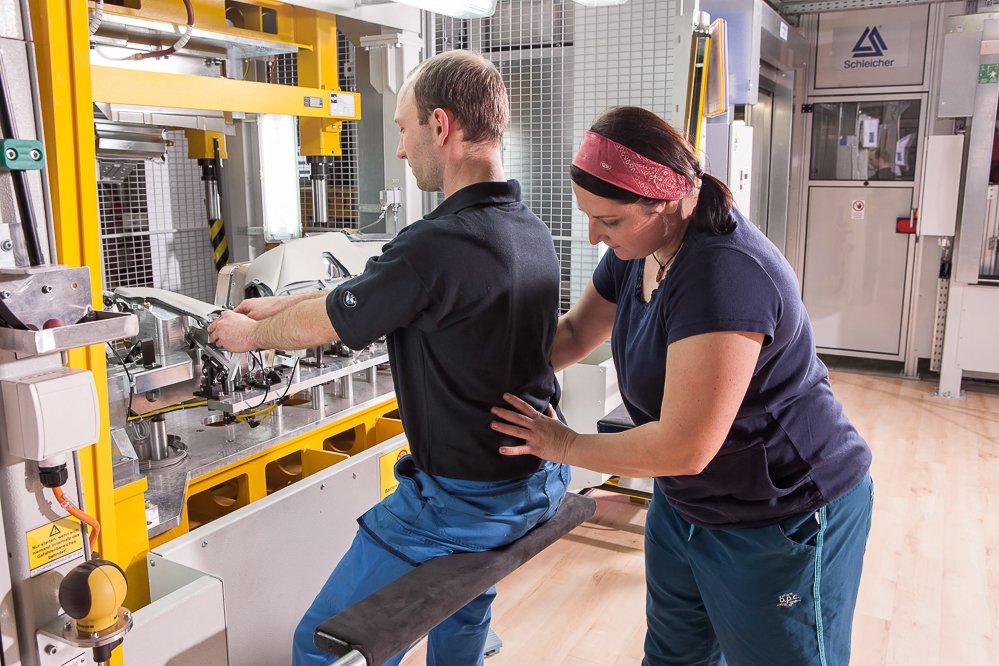 While making great strides in automation, BMW has also implemented an ergonomics program named ‘Today for Tomorrow’. With it, they focus on the longevity of factory workers and how to enhance productivity whilst simultaneously reducing the risk of injury across all areas of the plant. Take the dashboard assembly for instance, which use wooden tiled floors that apparently, are softer on the knees. Another example is a ‘command chair’ from which the operator fits rear elements such as panels, beds and upholstery. No longer are workers required to lean into the car whilst performing select tasks, eradicating myriad back problems in the process.

“the program focuses on how to enhance productivity whilst simultaneously reducing the
risk of injury across all areas of the plant.”

Today for Tomorrow though does not just come down to fancy tech. The program also offers a rigorous physical fitness regime for its workers, including fitness machines, hang bars and other equipment scattered around the production floor. BMW still has no hard data on the results of this program, but feedback, by and large, has been positive. Work-related fatigue and injuries are dropping, while productivity is going up. 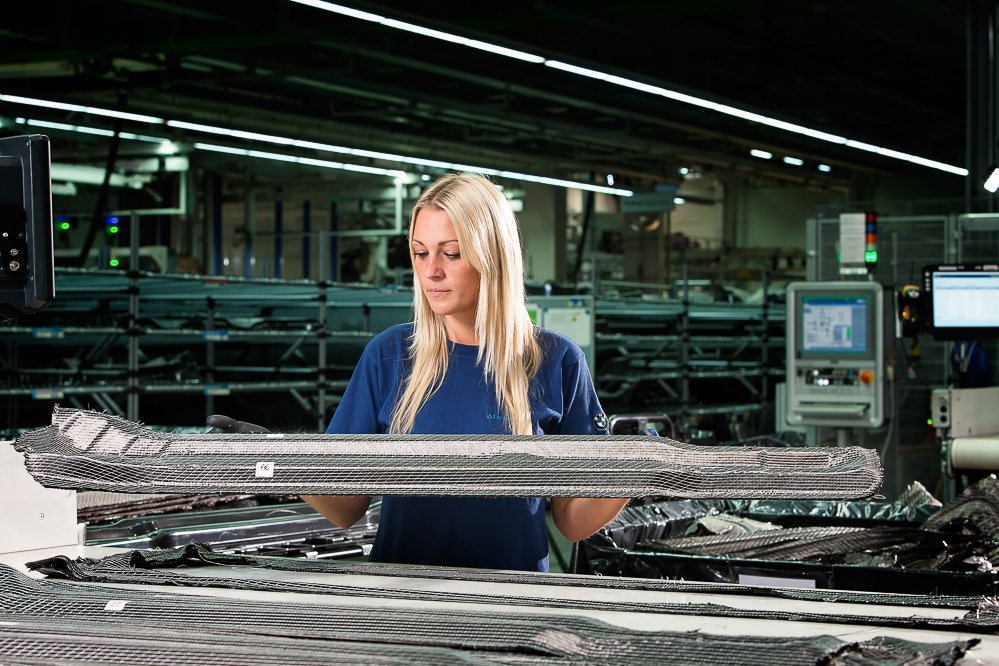 There is one thing that strikes me as odd though at both Dingolfing and Landshut, given the wildly positive steps that have been taken thus far. As we continue our tour of both facilities, we can’t help but notice the presence of female technicians on the factory floor is all but non-existent. It’s surprising, given that Germany is the epitome of work equality across the globe, but also that 50%, give or take, of the company’s PR team is female-led. Compare that with just 16.1% of the workforce at Dingolfing and 12.1% in Landshut, the 0.1% for both, incidentally, referring to the increase of female technicians between 2016 and 2017. Give it another 339 years at that rate, and BMW will finally be on target. You can’t help but wonder at what stage its automation program will be at by then.

If you enjoyed this story about Dingolfing and Landshut, you can check out more BMW stories HERE