Despite the internet flipping its collective nut over the past few days following the announcement that grid girls will disappear in 2018, the biggest revelation set to rock Formula 1 next year is still the introduction of the controversial HALO device. 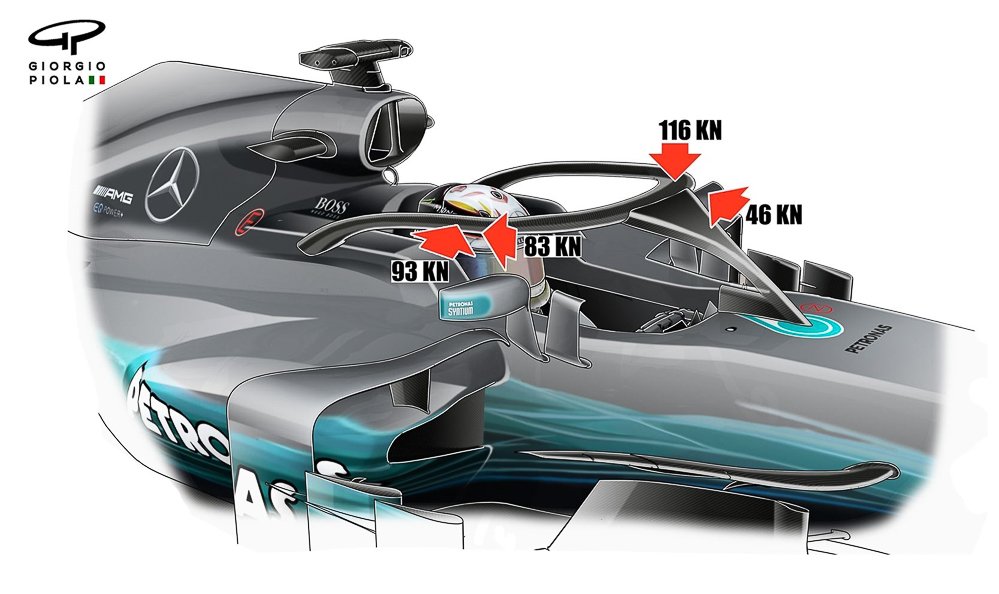 The arc of the HALO has been made wider since its conceptual debut to improve visibility and stop the driver cracking his head off the structure under impact.

Mounted to the car’s cockpit surround, the HALO device is comprised of a titanium hoop framing the cockpit, plus a vertical pylon attached to the nosecone, which is designed to protect its driver from flying debris.

In the above animation by F1 technical journalist Giorgio Piola, and during mandatory crash tests run by the sport’s governing body, the FIA, the HALO must withstand longitudinal forces of 83kN from the front and a lateral load of 93kN from the side. To put that into perspective, that’s the equivalent of a 20kg object – or a loose wheel – striking the HALO device at 225kph (140mph). In a series of tests during 2017, the biggest load tested from above was 116kN, and peak load had to be withstood for a constant five seconds without any component failing or weakening.

To give you an idea just how far this device has come, when Mercedes originally proposed the idea back in 2015, the HALO was originally made of steel, its capabilities demonstrated by a 20kg tyre being fired at it from a nitrogen-powered cannon (see the video above). One year later, Ferrari fashioned a carbon fibre clad upgrade before the lighter, stronger titanium version that debuted later that same year offered greater efficiency for both driver extraction and visibility, even though the amount of time in which a driver must be able to climb out of the car has now increased from five to seven seconds.

“the HALO must withstand longitudinal forces of 83kN from the front and a lateral load of 93kN from the side.”

Weighing between 10 and 14kg, the HALO has also proven something of a nightmare for F1 designers, who are now faced with lowering the car’s centre of gravity, and thus, ensuring the new safety device does not affect outright performance.

Quite honestly, despite the herculean amount of backlash its introduction has received, a further development of F1 safety can only be considered a good thing where 370kph (230mph) speeds are a proven reality. Complaining how dog rough the design most definitely does look – and there’s already speculation a re-design is on the cars for 2021 – that’s simply not a good enough argument when faced with the constant march of improving motorsport safety. You need only search for details of Felipe Massa’s accident at the Hungaroring in 2009 for further proof of that, to say nothing of the tragic accidents that befell Henry Surtees at Brands Hatch that same year or Justin Wilson at Pocono Raceway in 2015.

If you enjoyed this HALO device article, you can check out more Formula 1 stories HERE