The legendary ‘Brabham’ has returned on a supercar designed to rival the track-only Ferrari FXX-K and McLaren Senna. Limited to just 70 examples worldwide, the new BT62 pays tribute to 70 years of the ‘Brabham’ name in motor sport, and packs both a mighty 700bhp and a $1.35 million price tag in-keeping with its hyper-performance category. If that figure seems a bit steep, bear in mind that also buys the new owner automatic entry into an exclusive Brabham driver development program designed to develop their “physical ability and determination.”

Where does the BT62 name come from?

The BT62 supercar is the first official ‘Brabham’ since the BT60B raced a part-campaign during the 1992 Formula 1 championship. A BT61 was penned but never built following the team’s collapse before the start of the 1993 season.

The heritage doesn’t end there though. The first 35 supercars that roll out of Brabham’s new Adelaide factory in South Australia will each boast a bespoke livery in tribute to the F1 team’s 35 Grand Prix victories between 1962 and 1992. The first will feature a similar to the green and gold livery on the BT19 single seater company forefather Jack Brabham used to win the 1966 French Grand Prix en-route to his final World Driver’s Championship.

So crucial is this link to Brabham’s heritage that even the BT62, designed to deliver ‘blistering’ on-track performance, was designed around ‘the same brief as each of the BT-designated vehicles that came before it’, albeit with contemporary processes and materials. Speaking of which…

Back to the supercar. Give us the juicy bits…

Constructed atop what the company calls a ‘tubular metallic architecture’ – a method common in GT track racing – the aggressive bodywork has been designed via CFD technology and is constructed primarily from carbon fibre. It’s an aerodynamic package that stands on 18in centre-lock wheels clad with competition-spec Michelins. Double wishbones are at each corner and are supported by Ohlins TTX coilover springs and dampers, while Brembo carbon brake discs take care of the deceleration.

Also of particular note is the enormous, adjustable rear wing. Like the splitters and body panels, it too is fashioned from the woven black stuff, and is capable is producing 1200kg of downforce. Safe to say the BT62 will be quite nimble through the corners…

Power comes from a mid-mounted, naturally-aspirated (yay!), in-house built 5.4-litre V8, which pushes both 700bhp and 492lb (667Nm) to the rear wheels via a rear-mounted Holinger six-speed sequential gearbox.

The precise performance figures remain a mystery at present. However, and quite remarkably, the BT62 has a dry weight of only 972kg, some 1283kg less than the McLaren Senna. That also means the Anglo-Australian supercar boasts an eye-popping 720bhp/ton power-to-weight ratio, 60bhp/ton more than the McLaren.

“Limited to just 70 examples worldwide, the new BT62 pays tribute to 70 years of the ‘Brabham’ name in motor sport, and packs both a mighty 700bhp and a $1.35 million price tag.”

Inside, the cabin features a left-hand drive setup as standard, although a right-hand option is available ‘on request’. In-keeping with its motorsport heritage, the interior has also been almost completely stripped out, featuring ‘only’ a 12in digital instrument cluster, a carbon seat shell with six-point racing harness, and a removable, F1-style carbon fibre steering wheel.

Impressive in an of itself, the BT62 is apparently just the opening chapter of a long-term development program for Brabham, the Anglo-Australian company headed by Jack Brabham’s eldest son David, a former 24 Hours of Le Mans race winner. Indeed, offering “high-performance vehicles [that] challenge and reward the driver in equal measures”, the ultimate goal is to one day compete at Le Mans. 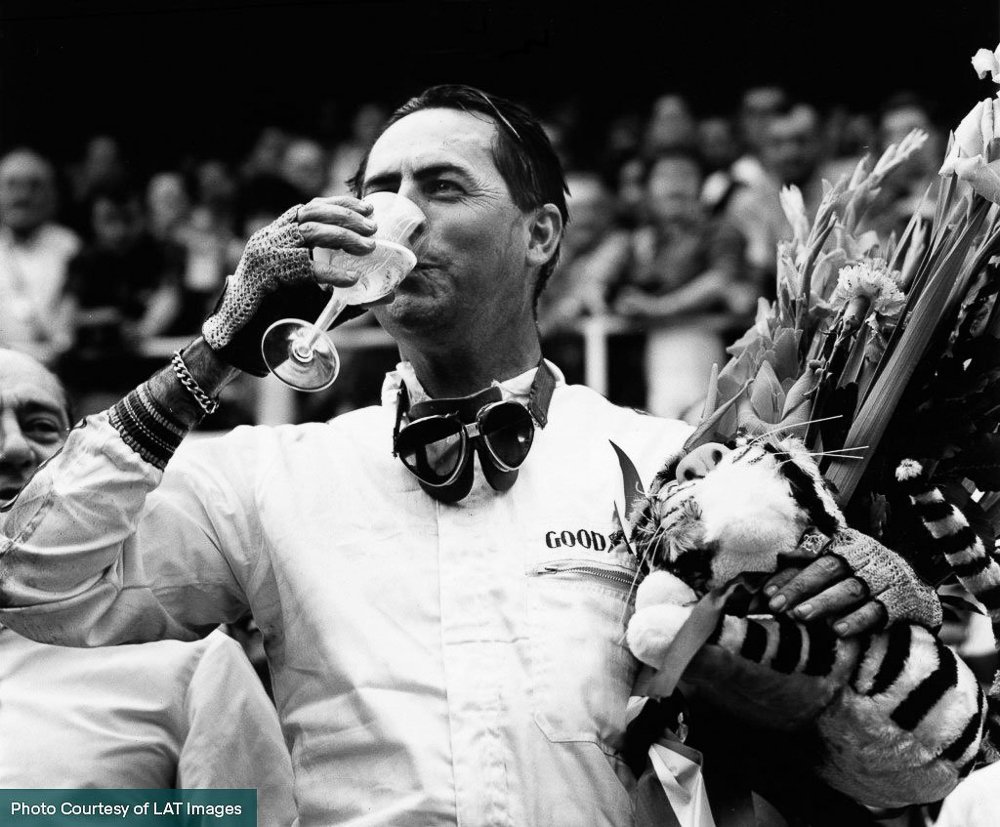 1966: Sir Jack Brabham makes history at the French GP as the first driver to win an F1 race in a car bearing his name, the Brabham BT19

The Brabham legacy, in brief*

(*Take this with a pinch of salt, given that our resident Motoring Idiot will talk for days on this subject if encouraged…)

It’s been 70 years since the late Sir Jack Brabham launched his motorsport career in 1948, one that would secure the Australian legend three Formula 1 World Championships in 1959, 1960 and 1960. 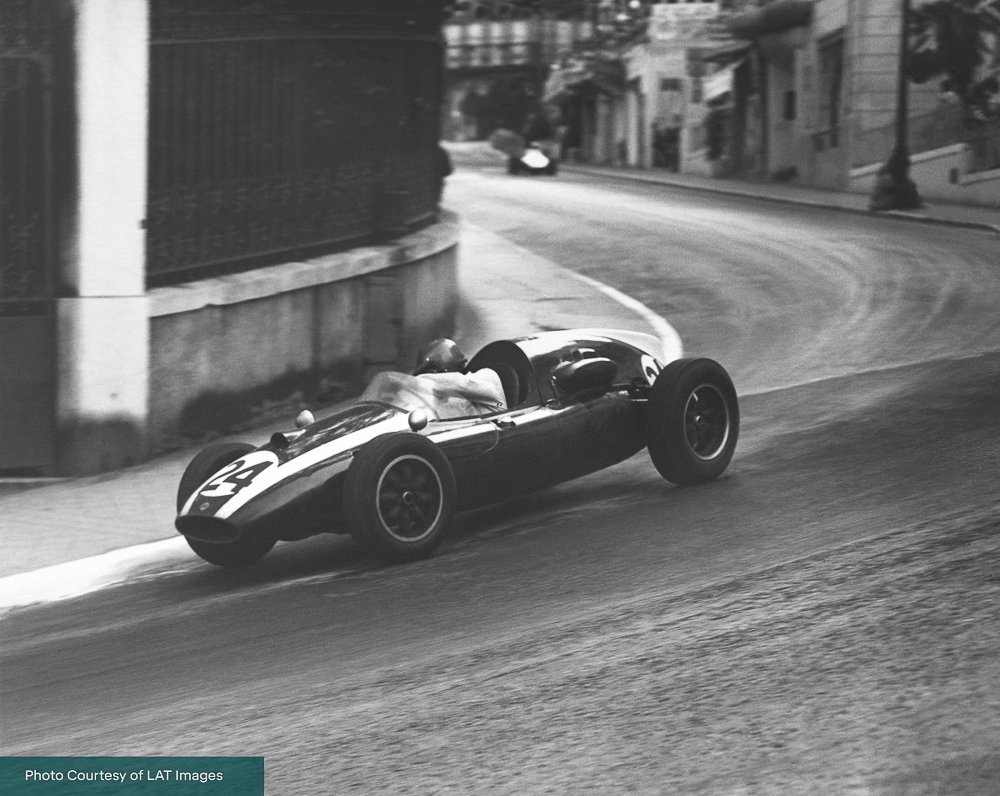 A mechanic in the Royal Australian Air Force from the age of 18, Sir Jack’s speed on the highly competitive national racing scene – midget racing in particular – would see the Australian leave his hometown of Hurstville for Britain in 1955, reigniting a relationship with British company Cooper, with whom the Australian had already been crowned 1953 hillclimb champion. An ever burgeoning relationship with company founders Charles and John Cooper would see both ‘Black Jack’ – an ode to his demeanour of ‘shadowy silence’ – make his Formula 1 debut at Aintree in 1955 in a ‘Bobtail’ sports car he had built himself, and Cooper Company take on and utterly dominate the best Europe could offer as Formula 1 changed beyond recognition heading into the 1960s.

“It’s been 70 years since the late Sir Jack Brabham launched his motorsport career in 1948, one that would secure three F1 World Championships.”

It was Brabham’s incidence for example that Cooper ventured down the rear-engined route at a time when Europe’s best and brightest religiously mounted their engines in front of the driver, a decision that significantly improved Cooper Car’s weight distribution, and thus, their manoeuvrability. Having already won the non-championship Australian Grand Prix in 1955 (a result that encouraged persuaded Brabham to move to the UK full-time with his family in-tow), Black Jack piloted a rear-engined, 2.5-litre Cooper T51 to his first official Grand Prix win at the season-opening Monaco Grand Prix in 1959. It was the catalyst that secured a further six wins from 17 outings, and back-to-back world championships in 1959 and 1960. 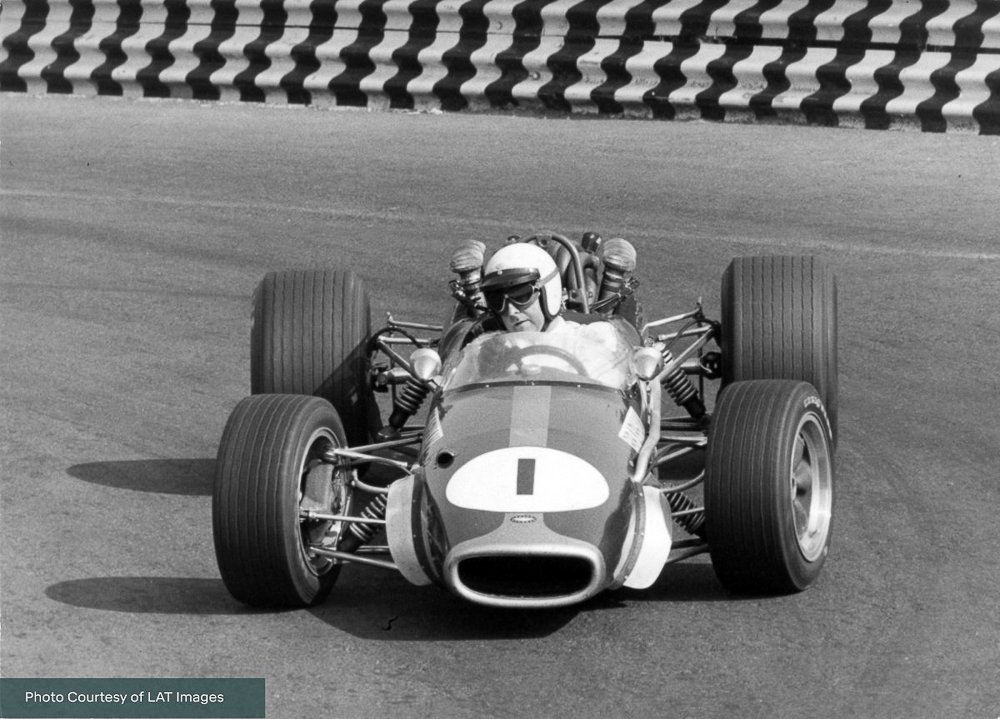 Though the relationship with father-son Charles and John was still strong, both Cooper’s fading stars against a rejuvenated Ferrari, plus his own less-than-dormant desires to once again build his own cars, saw Brabham part company with Cooper at the end of 1961 to form Motor Racing Developments (MRD) in partnership with his friend, and talented Australian designer, Ron Tauranac.

The first five races of 1962 – under the Brabham Racing Organisation banner – were run with a customer bought Lotus 24, but the first-ever Brabham F1 car, the BT03, would make its debut at that year’s German Grand Prix. Retirement due to a broken throttle linkage was not the greatest of starts, but consecutive 4th places at Watkins Glen and South Africa showed there was definite potential in the new car, particularly with its namesake personally fine-tuning both the chassis and the Climax V8 engine. In only its second year, the Brabham team finished 3rd in the Constructors’ Championship, and one year later, Sir Jack’s teammate Dan Gurney took the team’s first and second Grand Prix victories in France and Mexico.

” ‘Black Jack’ piloted a rear-engined Cooper to his first official Grand Prix win at the season-opening Monaco Grand Prix in 1959.”

It would be another three years before Brabham won a Grand Prix in his own car – the Repco V8-powered BT19 – but he would do so four times in succession in 1966, a run that helped secure his third F1 world title. It was a feat that made Sir Jack, at the time, only the second three-time World Champion in F1 history – behind five-time champion Juan-Manuel Fangio – and the first driver to win the world title in a car bearing his own name, a unique achievement that seems unlikely to be equalled. 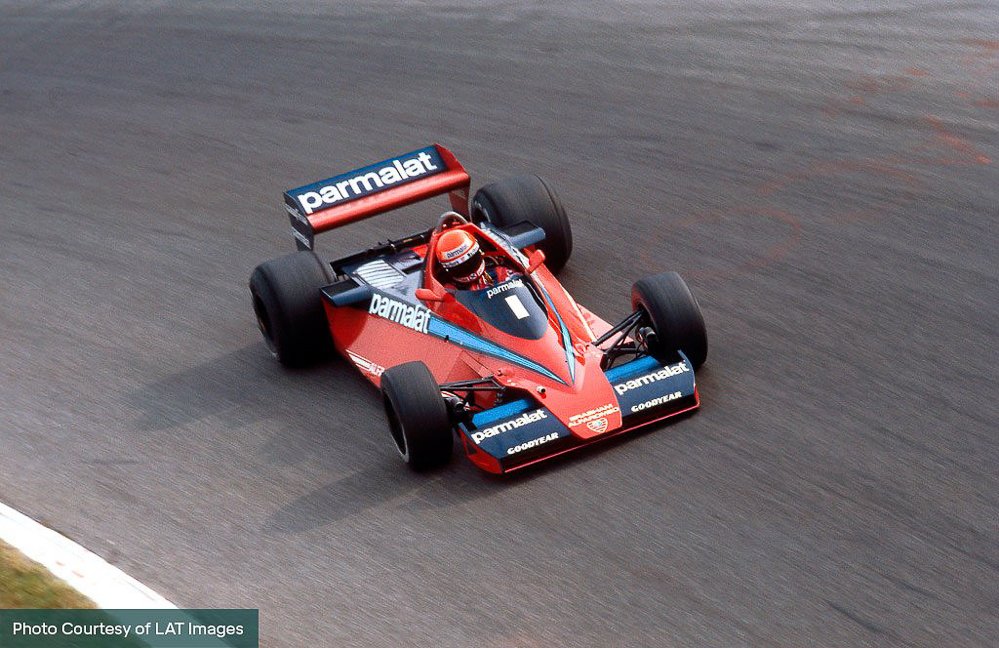 1978: Niki Lauda takes victory at Monza in the Brabham BT46 at the Italian Grand Prix

Though Brabham himself would secure only three more Grand Prix wins – the last of which came at South Africa during his final season as a driver in 1970 – the success of the Brabham would continue. Teammate and Kiwi Denny Hulme would be crowned the 1967 World Champion in one of Sir Jack’s cars (the BT24), and after the sale of the team to future F1 supremo Bernie Ecclestone in 1972, the Brabham team would go on to foster the careers of legendary figures Niki Lauda, Gordon Murray, Carlos Reutemann, and Nelson Piquet, the latter of whom, with the help of turbocharged BMW engines, took his first of three World Championships in 1981, and a second with Brabham in 1983. Even the legendary ‘fan car’ – so-called for the enormous fan that extracted air from beneath the car – won its one and only Grand Prix at Sweden with the Brabham name down its flank.

“in 1966, Sir Jack became only the second three-time World Champion in F1 history, and the first driver to win the world title in a car bearing his name.”

Fortunes would turn though after the team’s final race wins in 1984 and 1985, Brabham slipping further and further into financial destitution after Ecclestone sold his share of the team in 1987. After unsuccessful dalliances with Swiss financier Joachim Luhti (who would later be arrested for tax fraud) and Middlebridge Group Limited, the final Brabham – BT60 – would enter its final Grand Prix in 1992 at the Hungaroring, driven by one final F1 legend in his rookie season: 1996 World Champion, Damon Hill. 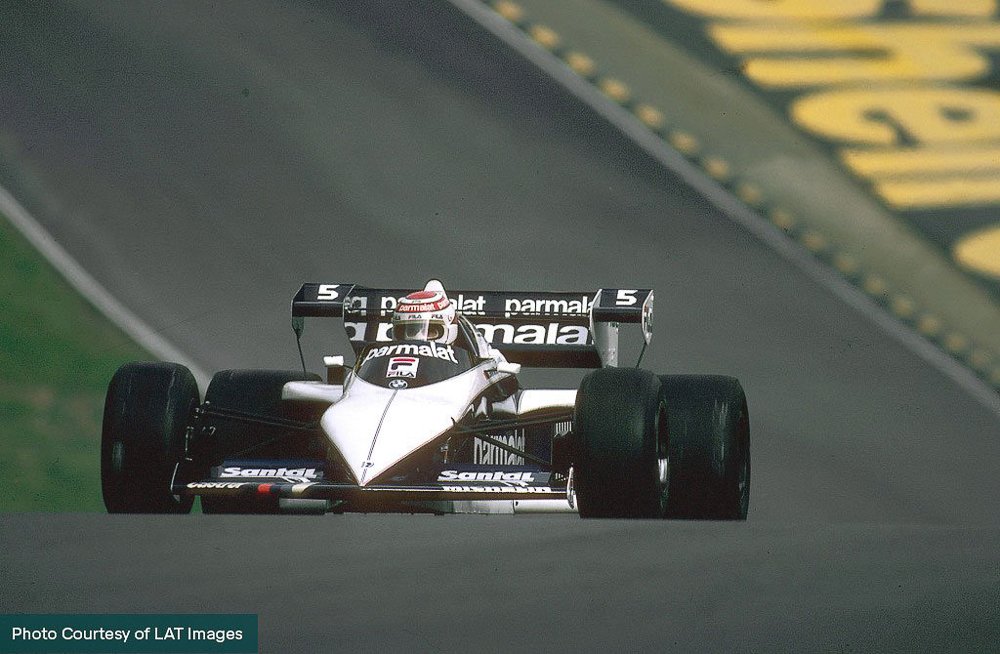 An attempt was made to return the Brabham name to the F1 grid for 2010 by German businessman Franz Hilmer, until a lawsuit by the Brabham family – who claimed to be “in no way involved” with the project – scuppered those plans entirely. They would later obtain exclusive rights to the name, leading, eventually, to the foundation of Brabham Racing in 2014 and the official launch of Brabham Automotive in 2018.

If you enjoyed this Brabham Automotive BT62 article, you can check out more Motoring stories HERE