The last time I drove an Aston Martin Vantage was in 2007. It was the V8 Vantage roadster, it was a GT comparison, and it was… fine. The gearbox was a first generation (single clutch) sequential and the interior was nice rather than spectacular, but the biggest let-down for me were the keys, which looked like they belonged to a Ford. Having owned a Ford Fiesta a number of years ago, finding the same exact key turning up on an Aston Martin was anticlimactic.

The engine, however, was outright fantastic, and I confess passing through a tunnel several times just to enjoy the throaty rumble of those eight pistons rhythmically bouncing off the walls and into my ears unencumbered by roofs or windows. Glorious.

However, at that time, the Vantage lacked a personality of its own. In a brand that featured sporty GTs and a fast saloon, the baby Aston was just that: an entry-level model with a bit less power, a bit less luxury, and a bit less costly for those that couldn’t afford any better.

But the new model? Well, that is an entirely different story…

The Philosophy, and the design

Introduced in 2017, and no longer ‘the baby’ Aston, the Vantage has transformed into a pure driving machine designed to spike the hairs of your arms on-track. And how Aston Martin’s engineers have managed to do this is very simple: they took a blank sheet of paper, defined the core characteristics, and dismissing most of what they had done before by starting from scratch, despite the previous generation shifting over 20,000 units, and thus providing the bulk of Aston’s business.

From the outside, the Vantage immediately indicates its focus. It’s menacing from the front, with headlights so thin they are slanted into a frown, the bonnet ‘scoop’ acting as a creased brow that accentuates the anger. A little lower, the Aston Martin shaped front grille is enormous and seemingly not integrated with the body. The effect is as the big mouth of a sprinter, or the voice box of a storm trooper, and is so scary that were Darth Vader to shape his helmet as the front of this car, even that would not be out of place.

“In a brand that featured sporty GTs and a fast saloon, the baby Aston was just that.”

The side meanwhile is muscular but lean, with a continuous curving shape that starts at the nose, follows the side doors and drops towards the rear. Between the wheels, there is another line that mimics the wing of a plane. It seems to indicate that they tried to create a Venturi effect on the floor of the car. Between the front and rear tires, the floor of the car extends laterally beyond the natural flow of the body, accentuating the aerodynamic features of the car. The side gills, traditional on Aston Martin, this time serve to enhance airflow from the front tires to reduce lift and increase flow towards the sides of the car. As mentioned, the Vantage is purposeful in every detail.

To reduce the overall height of the car, lower the centre of gravity and increase the balance, Aston has mounted the engine (more on that in a second) behind the front axle. As such, the wheels are pushed to the edge of the car and, while the overall length is 4.46m, the wheelbase is long 2.7m.

And the rear is, if possible, angrier than the front. The enormous air diffuser, which like the grill, seems disconnected from the body, and it is so large is seems to interfere with the natural shape. Then the thin light strip outlining the traditional Aston shape combines with the diffuser to give a very clear message: “Don’t mess with me”. I shan’t.

The ‘from scratch’ philosophy continues on the inside, where the designers have managed to pack a ton of settings into only 35 buttons, starter included. The instrument panel is completely digital, allowing a variety of configurations and colours. Notably, Aston’s affiliation with Daimler shows in the infotainment system and its control: you could say that a larger screen would not go amiss as the equipped 8in is slightly small for the visually deficient, but that’s really nit-picking.

“Introduced in 2017, the new Vantage has transformed into a pure driving machine designed to spike the hairs of your arms.”

When it comes to sound systems, Aston Martin has left its Linn and Naim days behind and are now dealing with Bang and Olufsen for most of the line-up, although personally I hope the Damiler hook-up means Aston will one-day start using Burmester instead. That said, the audio system is competent, easily connects Bluetooth, iPhone, Android and Satellite Navigation, and sounds just fine. In all fairness, the car is so loud, this is almost irrelevant.

And the source of the noise sits right in front of us. 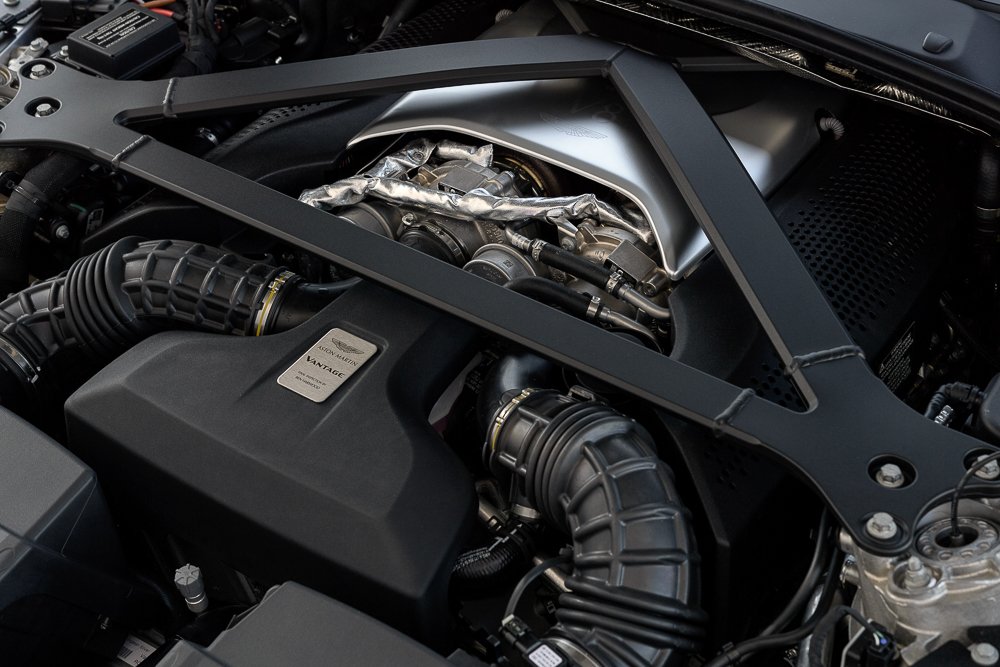 Firstly, the commitment from Aston Martin to the future by leaving out-dated aspiration technology and embracing turbo must be commended. Yes, I am sure that some, The Motoring Idiot included, will miss the ‘traditional Aston Martin sound but as stated from the beginning, the personality of the Vantage is clearly defined towards making it a true sports car: if you feel you need the ‘purity’ of ‘tradition’, go ahead and buy a Morgan. Modern is better. For proof, make a call on a rotary phone and tell me if the iPhone offers a better experience.

Secondly, we know that this engine produces more than 600bhp when mounted in the Mercedes-AMG E63. That means Aston has, finally, a product life plan. Combine this with the abundance of heavy interior luxury items, and the next seven years will likely reveal a few versions with increased power and reduced weight.

And third, the engineers at Aston could not leave tradition completely behind, so the engine bay has been designed to hold the V12 engine available on the DB11. I personally hope they don’t go that route as the Mercedes engine’s capabilities are quite enough but if client demand justifies this, so be it.

On-track at the Portimão International Circuit, we can immediately attest to how well put together everything is on the new Vantage. Aston has shifted the three driving modes to Sport, Sport+ and Track, leaving ‘Comfort’ for the wimps. And rather than being a clever marketing ploy, ‘Sport’ is actually SPORT. Throttle response is immediate and the power delivery is ridiculously linear.

Sharp direction changes are the norm of course on-track, and here we find that the traditional rack mounted paddle shifts are found quite out of place in the turns (a wheel-mounted system would be better). Nevertheless, the steering is weighty, fast and precise and, for someone with the proper driving skills, hitting the apex should be an easy task. The aluminium chassis, which is 70% new, offers a rigidity of 42,000 Newton per degree, a sizeable jump from the DB11’s 32,000, and from the previous Vantage’s 27,000. For comparison purposes, a Lamborghini Aventador is about 35,000, so in terms of stiffness, the chassis is like a lump of rock.

“rather than being a clever marketing ploy, ‘Sport’ is actually SPORT.”

On the scales, the Vantage tips 1530kg completely dry. That’s Porsche 911 Turbo territory and a clear indication of whom it targets. Weight balance is a perfect 50:50 and the power is transferred to the ground through a set of specifically Vantage tuned Pirelli P Zero. Dimensions are 255/40 front and 295/35 back. Pricey? Yes. Good? Oh dear me, YES! 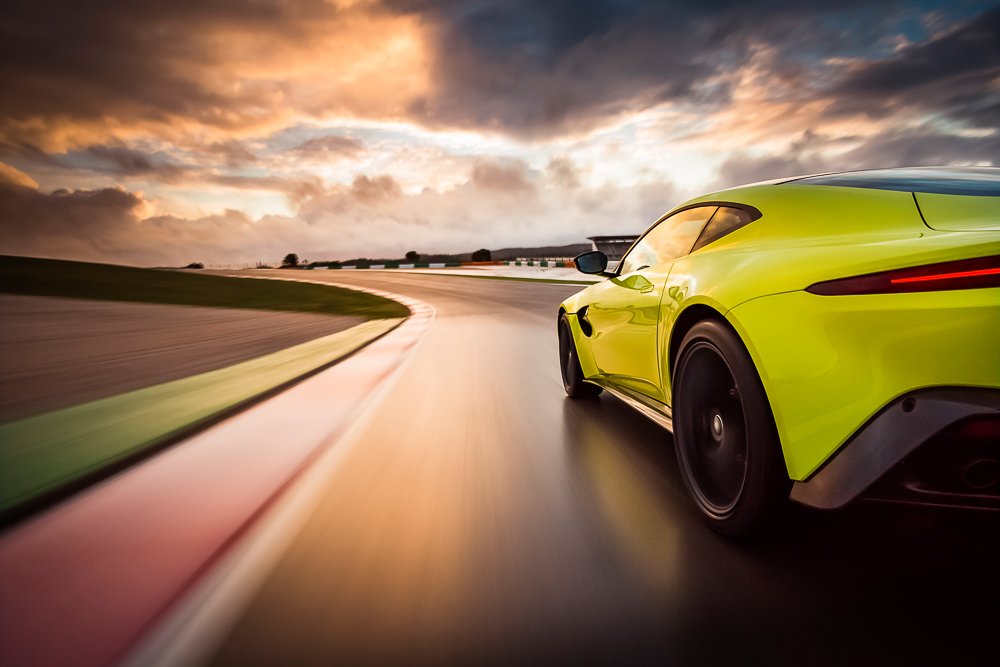 Upshifting the ZF eight-speed gearbox is fast enough to catapult the Vantage to 100kph in just 3.6 seconds, but do not be fooled by the numbers alone, as it’s the driving dynamics and the technology therein that truly make the difference, such as the dynamic Torque Vectoring that ensures maximum power is sent to each wheel, the Adaptive Damping which enhances the downward force, and the electronic limited slip differential that’s linked to the driving computer and can lock the differential in milliseconds.

As such, cornering speed and lateral G are outstanding, and for a normal person to handle the car on the edge is now not only accessible, but easy, and thus, safe. Additionally, the driving modes and traction controls do allow a certain controlled tolerance that makes you feel like you should have a position in the World Rally Championship. You are so talented.

“the steering is weighty, fast and precise and, for someone with the proper driving skills, hitting the apex should be an easy task.”

Lest we forget, sometimes, after gaining speed quickly, you need to stop, and in my opinion, the best brakes are those you don’t need to talk about. That’s the case on this car.

For the engineers among you, we should mention that the suspension is a forged double wishbone at the front and a multilink behind. Unlike the DB11, the rear suspension is solidly mounted into the chassis, making the connection with the driver all the more direct and informative. Unfortunately, this also translates into a rougher ride that, rather than diminishing the character, ironically enhances it.

The drive: on the road

For our road test, the weather gods decided that we should try driving a 503bhp sports car in the rain (after a sunny track day, that seems fair). The winding roads of southern Portugal demonstrate that our impressions the day before translate perfectly to everyday life. Normal cruising speeds on the highway meanwhile are smoother than the sporty setup would have you believe, and while it poured, the amount of available grip is beyond comprehension. Also, the sound in the cabin is rumbly but not unpleasant and, while we don’t think this is the right transport for the family vacation, the 350km we did on this day went by in total bliss.

The Vantage comes with the bunch of driving aids we have grown accustomed to, such as blind-spot sensors, cruise control and parking sensors. Crucial as the car is quite low on ground clearance, and those carbon fibre inserts can break quite easily against a kerb. They’re also not what you’d call cheap. 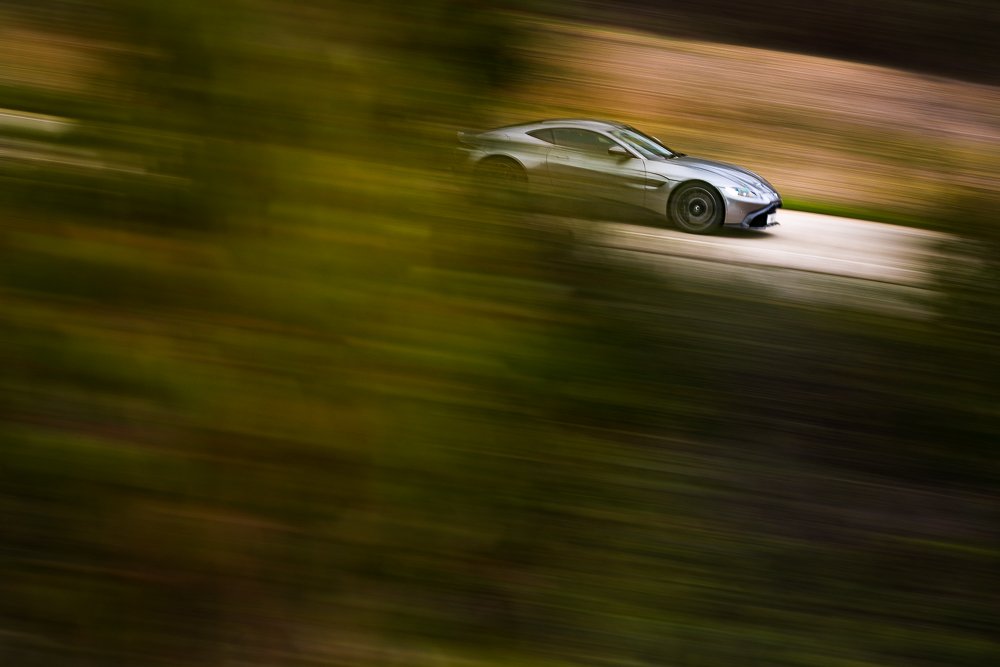 The new Aston Martin Vantage is truly great. At just over $160K it is slightly more expensive in comparison to, say, a Porsche 911 GT3 but I would argue that it will put a smile on your face every day of the week, and in terms of boot space when going to the shops, the 350-litre the Aston provides are a clear advantage.

On the road and the track I can hardly think of anything that is more fun and that gives such a sense of total control and balance. Aesthetically, it is one of the most beautiful cars on the market, and on the exclusivity rank, note that Aston Martin shipped just 4,200 units last year. Chances of seeing one on the road are slim, as a result. And yes, I want one.

If you enjoyed this Aston Martin Vantage review, you can check out more Motoring stories HERE