There are a few cars that motoring journalists review but despise. This is because of the association to the main activity these vehicles are used for, and much less due to their features, aesthetics or value. These are taxis, police cars and the cheapest airport-available rental car. And footballers cars. Particularly of those that care more about their hair than their balls.

Thus, the Toyota Camry, worldwide leader in taxi fleets, falls squarely within that category. Mind you, this is probably about to end for electricity will soon power urban transport and Toyota is far behind in this segment. Credit to Last Name Mr. Toyota and his stubborn nature. But today, the Camry is a fixture in most cities taxi services.

There are good reasons for this hybrid to be the car of choice in urban transportation. First, the size. It’s huge inside. Legroom and headroom extravaganza that competes with the E-Class at a third of the price. Second, the boot. With enough capacity to move a studio flat furniture. As long as it is flat-pack Ikea type. Third, maintenance and time off road. With it being a Toyota, being commonplace and being cheap-ish, there is hardly a part that will require shipping when yours breaks. Thus, keeping the car in money-making mode is easy and cheap. And fourth, the mileage you extract from a tank. With 5.4l per 100Km, the visits to the petrol pump are fewer and further apart. Which is what you want. Time servicing clients rather than queuing at the station.

So, here we are, in an uber-sensible Toyota Camry Hybrid. The problem is that, while I don’t like the car, my analytical side can’t find a single flaw. Sure, there is a lot to say on taste, but in sheer checklist tactics, this road warrior is a perfect fit for the purpose it serves. Which is certainly not the norm in this segment, where pitfalls and little mishaps abound.

On the road, we are used to the Camry being a sedated car that will just get you there… sometime in the future. The hybrid though, gives quite an extra push in acceleration. This is of course evident off the line, but far more subtle and far more efficient on route. Pulling out of turns is much more agile than the standard. The system that seamlessly engages the electric motor when torque is needed completely changes the character of the car. So simply and effortlessly that you barely realize it’s happening. You just have torque on demand. 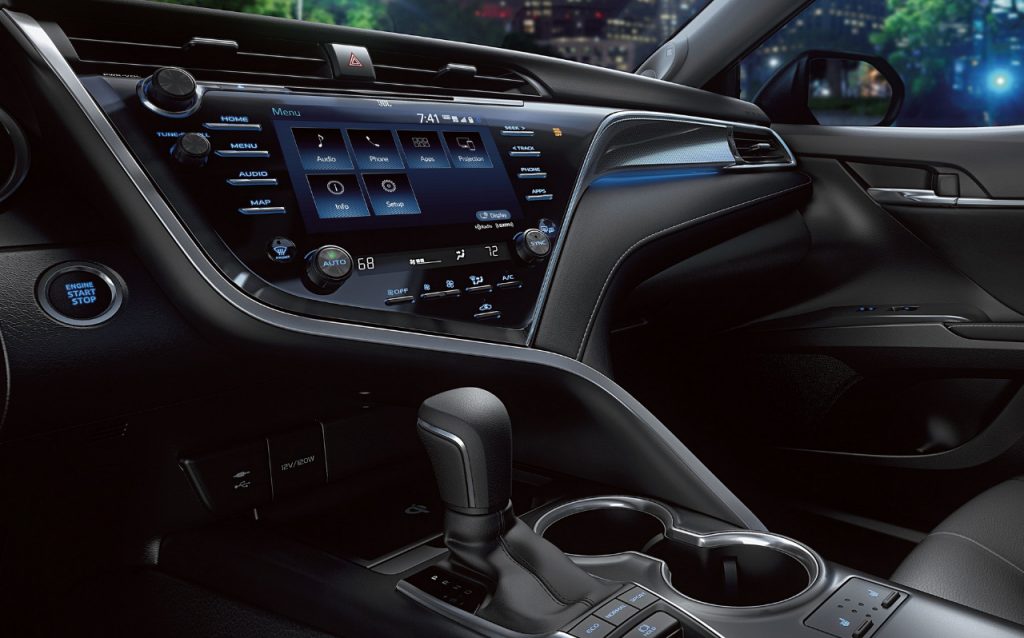 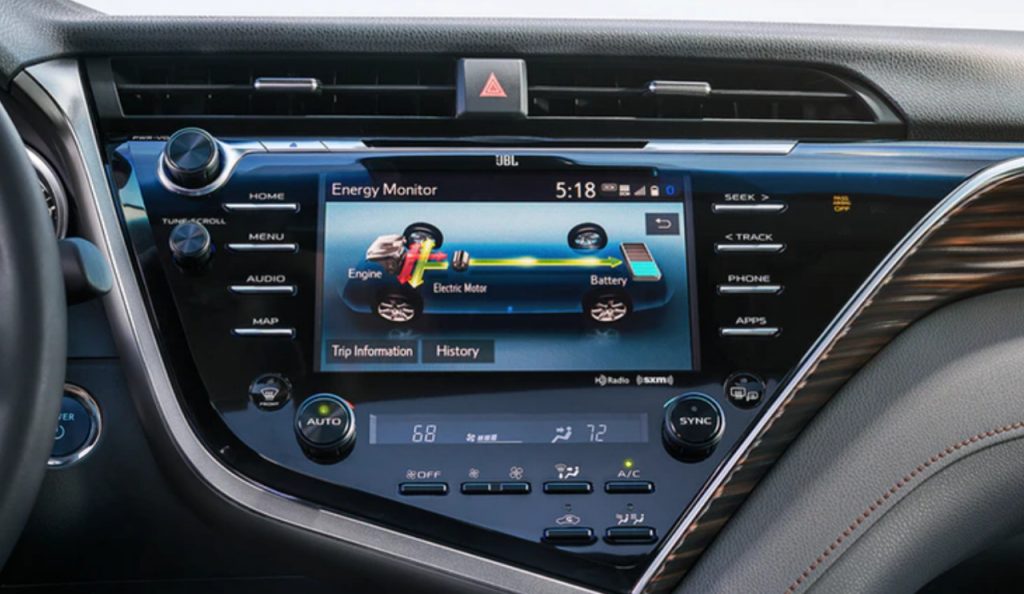 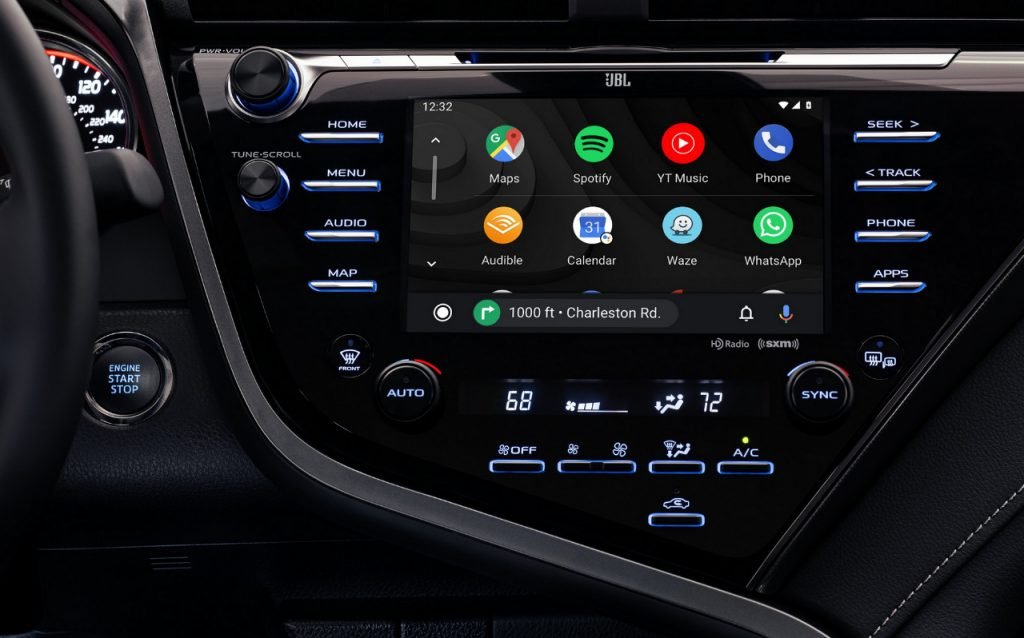 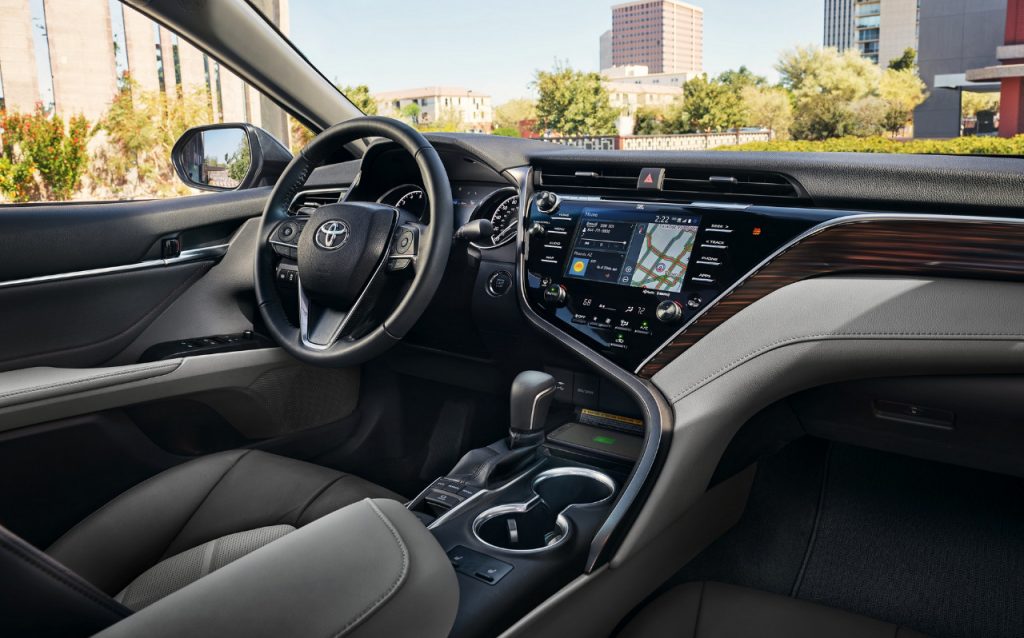 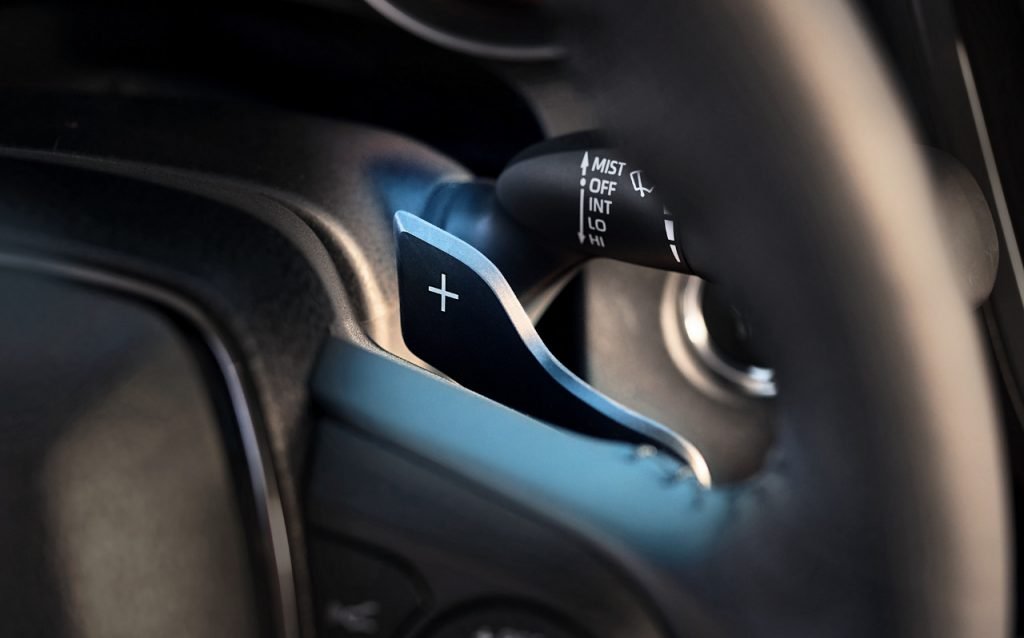 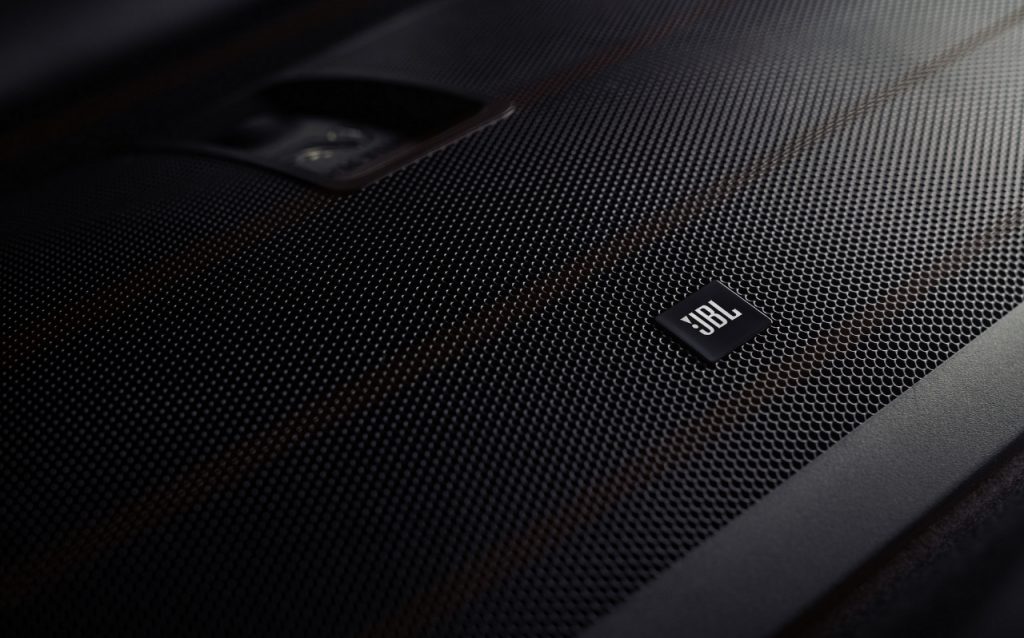 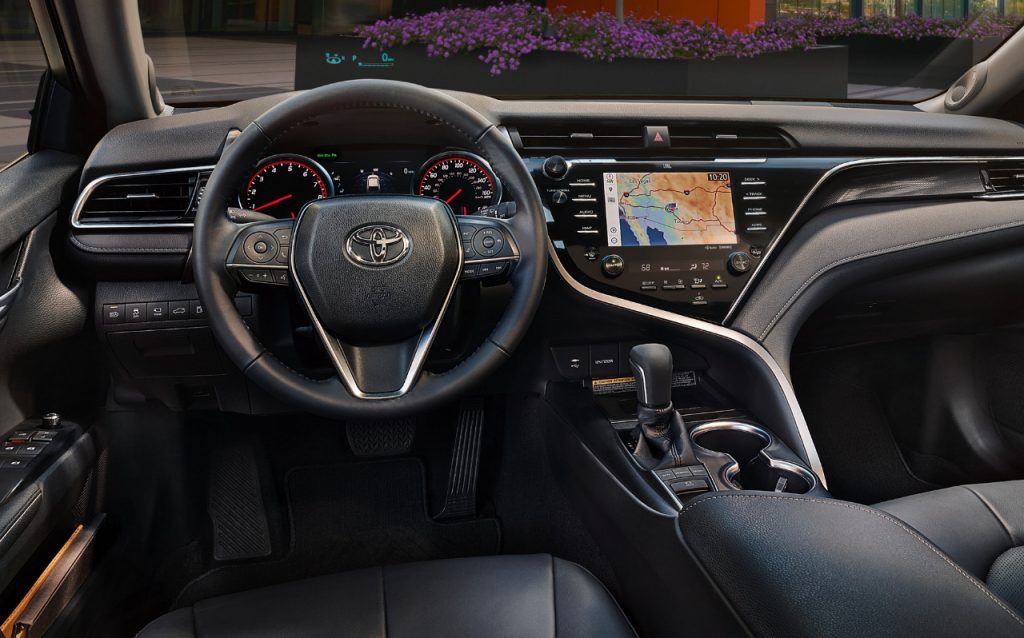 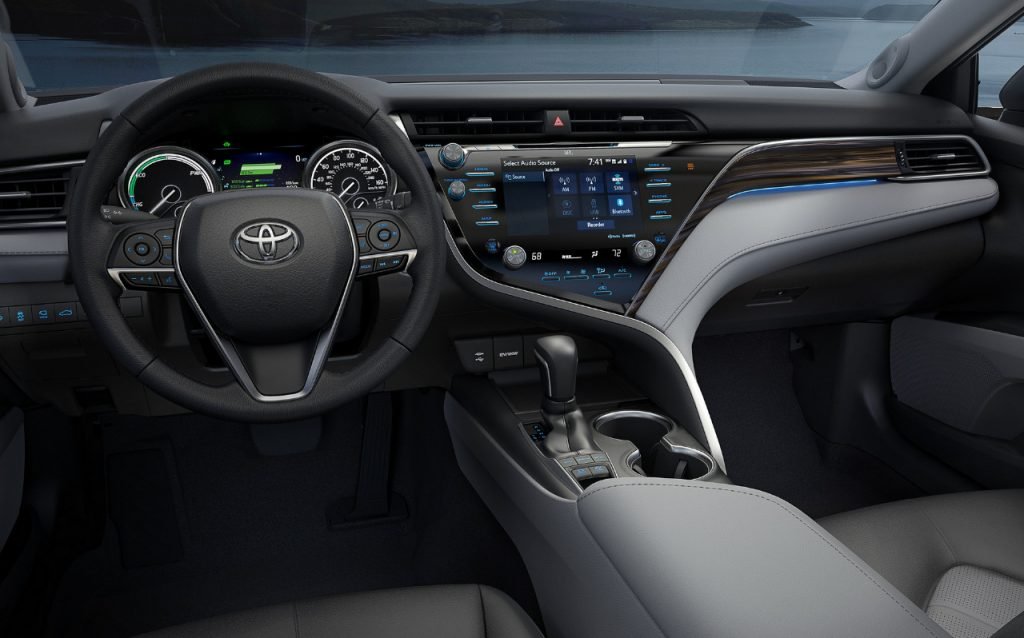 This is also great while negotiating the bone-cracking, teeth-rattling, back-breaking boulders the powers that be have decided to pepper every car park with. On a regular petrol-engined car you have two choices: pass them at speed, risking your health, sanity and suspension; or come to an almost full stop, play with the throttle until you get the right torque to pass the bump slowly. Engage hybrid, the Camry allows this in the first try, with no drama and no pain.

Aesthetically, it is the tried and true Toyota. Matter of taste, I suppose. It’s not to my liking. Mainly because it is just not imaginative. Feels like a composite of other cars, such as the bumpy bonnet of the Nissan Maxima, the front grille of the Lexus LC500, the back of the Altima… Can’t place it. Feels a bit odd.

However, this is just taste and, as such, completely unimportant. What is important are the two main true problems with the Camry. And they are price and efficiency.

The problem with the Camry Hybrid is… Toyota itself

In price the Hybrid is not expensive by any means. The issue is the distance to the regular petrol-powered engine model. At around $36,000 it is a whole $10,000 more expensive than the equivalent non-hybrid Camry. That’s almost a third of the price, making it an unreasonable purchase. It’s almost as if they did not want to sell this car to anyone else by fleets. Compare the RAV4, which we recently reviewed, and the distance between the pure gas and hybrid options is just $3,000. Now, you tell me what other reason for this may be…

The second issue is also related to the RAV4. During our drive, we did manage a 5.4l per 100km on the Camry, which is exactly the same as we managed on the SUV. How is that possible? This is smaller, lighter, more aerodynamic and nimbler. Yet, the fuel consumption stays the same. I give the benefit of the doubt to Toyota here, and assume that the Camry accelerates quicker without you noticing, and hence consumes a bit more fuel. Sure you arrive a tiny bit earlier but I am not certain of the value of that time…

All in all, a solid car I will never purchase. Not because it’s not good, but because it costs way too much over the standard, and it is way too close to the RAV4 in terms of raw price. Alas, I am pretty sure that is exactly Toyota’s intention though.